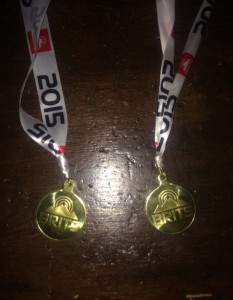 Had such a good week at the Brits in Tignes. It was great catching up with loads of friends from all over the UK and getting to ride all over the mountain with them. Sunday after we arrived the park was shut as there was another comp on so we spent most of the day in the half pipe. It was my first time in a proper half pipe so things started a bit sketchy, with not much height.

Monday was the Bangers and Cash rail jam. The weather was great with lots of riders just in tshirts. The setup was fun, with rails, a cannon, boxes and a jump. After a couple of hours in I was pleased to make the final which was pretty hard work in the heat.

At prize-giving in the evening I was really pleased to get gold and I also got a mention in the write up of the day.

“Based on the performances of the younger riders today, the future of UK jibbing is in good hands. Ciaran Tucker (16) truly stood out for making use of the entire course, oftentimes going bigger than some of the older and more experienced competitors.”     (actually i’m 15)

Wednesday was slopestyle but the weather was really bad with heavy snow. Because the runs were slow and visibility was poor the competition just ran over the rails and the first of the 3 jumps. I wasn’t that happy with my runs and only placed 6th.

On Thursday it was half pipe and the sun came out again. On my two qualifying runs I was pretty untidy but I was managing to get well clear of the lip and the height was enough to get me into the final. For my runs in the final I managed to keep my arms steady so I was pleased and thought that I had done enough to get silver. At prize-giving in the evening I was really pleased to get gold.

It was a great week at the Brits, coming away with two golds and I also managed to get up to 61.4 mph heading down to the half pipe.